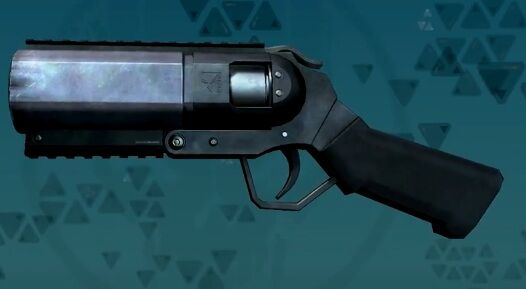 The Breech Loaded Pistol is a secondary weapon that was introduced as part of patch 0.991. It is commonly known as the 'Dart Gun' or abbreviated as 'BLP,' and is loaded with an exploding Breech as its standard ammunition.

As Agents progress they may customize the magazine, replacing the standard ammunition with an Incendiary Breech or a Scatter shot. The Incendiary Breech rounds are unique in the fact that they are the only incendiary mag which may be bought permanently with gp.

When using the Breech Loaded Pistol's stock ammunition, a skilled Agent may launch a Breech so that it will stick to an opponent and then detonate at a safe distance.

When using the Breech Scatter Shot ammunition, the BLP is essentially a "pocket" Shotgun and is most effective at close range.

The closest round to a traditional Flare, this ammunition will deal 300 damage over a period of time, capable of killing the pilot of a hardsuit. A Scorpion tank's driver isn't affected by the incendiary flare, however.

The default statistics for the weapon goes as follows:

This item cannot be purchased using GP unless the character is level 36 or higher.

The Breech Loaded Pistol can also be permanently unlocked by purchasing the Evacuation Pack.

'The Dart Gun acts as a Sticky Detonator, a skilled Agent may launch a Breech so that it will stick to an opponent and then detonate at a safe distance.'

Try and detonate the Breech at a safe distance or you will die, unless you're using an Incendiary Breech or a Scatter Shot.