Data Nodes are single-use items which provide a positive gain to stats when equipped to your character. Five data nodes can be equipped at any one time and are constantly active until they expire.

Data Nodes can only be acquired buying a node chance pack for 200GP/25ZEN, or though purchasing of of many other Chance Packs. 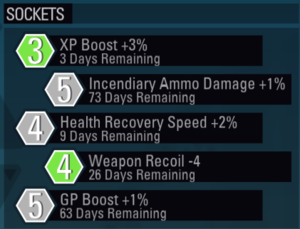 Warning: Some information in this section is based on rumour due to the rarity of high-level nodes, if you have accurate information, please help by expanding and correcting it.

Data Nodes allow a player to further specialise in a chosen build or balance out otherwise weak stats. For example, a heavily armoured player could choose a movement speed or stamina node to allow them to run faster and further than a player of a similar build not using nodes.

Notably, a player cannot socket more than one node that affects the same statistic, for example two +XP nodes, at the same time. In cases such as these the socketed node must be removed to make way for another.

Fusing Data Nodes allows a player to create nodes of greater rarity and effectiveness. Node progression is linear, fusing two Level 1 Common nodes has produces a single Level 2 Common node. Node fusion is however a chance based process, and any fusion will permanently destroy one of the two nodes used in the process regardless of if the fusion is a success or failure. In addition to this, when fusing two nodes of the same rarity and effectiveness, but with different stats, it is random which stat will be transferred to the fused node, but when fusing a higher effectiveness or rarity node with a lower level, the higher level node's stats will always be transferred to a successfully fused node, and if the fusion fails, only the lower level node will be destroyed.
The chance to successfully fuse two nodes increases depending on how close the nodes are to each other in effectiveness and rarity. For example, two level 1 common nodes will have a base chance to fuse of 55%, this can be increased with Zen, but only to a maximum of 65%. Chance to fuse drops by 10% per level of effectiveness difference between nodes, with a much larger drop when the level of rarity is different, but effectiveness the same making it very difficult to fuse nodes with very large differences in both rarity and effectiveness.
Fusion is better explained in the gallery below.

A full list of Data Nodes and their statistics is forthcoming.

Starting CP : Gives starting CP at the start of the match of __

Stun Recovery : Increases recovery from stun mine by __

Repair Gun Duration : Increases repair gun time before a reload is required by __

Tight Aim Move Speed : Increases the speed of your player in tight aim by __