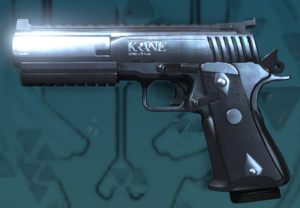 The Heavy Pistol is a secondary Weapon. Firing a heavier .45 Caliber cartridge, the Heavy Pistol is a step-up from the default Light Pistol. It has higher damage and accuracy than the Light Pistol, but is countered by its heavier weight, smaller magazine and slightly longer reload time. The statistics of the two are otherwise identical without Attachments, so modifying the Heavy Pistol to enhance its strengths of damage and accuracy while minimizing its low magazine count is strongly recommended.

The statistics for the stock Heavy Pistol are as follows:

This is a list of premades, both current and past.

A permanent heavy pistol receiver is available for free from a Raptr promotion in which you would receive 1 Heavy Pistol (permanent) and a 30 day Digital Tundra camo for reaching the Raptr Rank of Newbie.

The Heavy Pistol bears somewhat of a resemblance to the venerable M1911 Pistol which was also of the same calibre which was in service for more than a century.